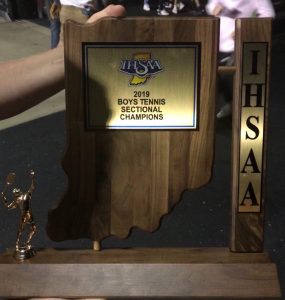 The Panthers won their second consecutive Sectional Championship, beating New Castle 4-1.  The boys celebrated with a rowdy ride home to Knightstown behind a firetruck escort and a parade of cars with horns blaring, then got recognized at halftime during the football game.

Our Sectional draw was challenging; we were the play-in match, which requires 3 wins to be champion.  After getting by Tri and Shenandoah 4-1 each, New Castle stood in the way for the defending champion Panthers.  Since this team graduated 5 Seniors last year, all of which played Varsity at some point, we knew we needed more work to get back to where we were. That effort started in early June and ended in another Sectional title.  This team lacked depth in some ways but made up for it in hard work.

Garrett Dalton took care of business as he has all year; he faced down every teams best tennis player and only lost once all season.  Tonight, he won 6-1, 6-1 at #1 Singles and got the ball rolling for the Panthers.  Senior Cooper Davis kept his late season form, winning #2 Singles 6-1, 6-3 over a tough New Castle opponent.  Brady Howell dropped the only court for the Panthers at #3 Singles against a very consistent player.

Sophomores Kyle Johnson and Connor Pyle put in another great effort at #1 Doubles, winning 6-1, 6-2.  #1 Dubs is a tough court to play, and for the last several years we’ve struggled to get consistent wins.  Now it’s no longer a “coach stress court”. 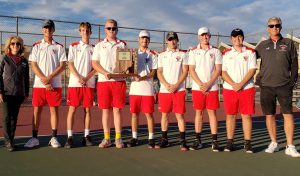 Dylan Chandler and Connor Keith went to a full 3rd set tonight, as it seems no Knightstown tennis match is complete unless somebody grinds out a marathon 3 hour ordeal, wearing out the fans and coaches in the process.  Amazingly, we’ve won practically every one of these tribulations all season, which speaks to this teams’ confidence and outright refusal to lose.  True to form, Chandler and Keith lost the first set, blasted New Castle 6-1 in the second, then pulled out the 3rd set 7-5, ending the match with Knightstown winning 4-1 and advancing to the Regionals in Richmond for the second year in a row.