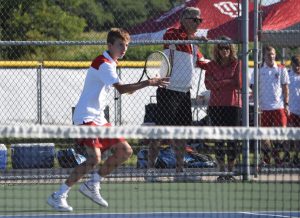 The Panther tennis team appears to be peaking at the right time, based on play tonight at New Castle.  Knightstown beat Shenandoah 4-1, and are playing in the Sectional Finals tomorrow at 4:30. The 4 winning courts won by a combined total of 48-2, one of our best performances of the year. 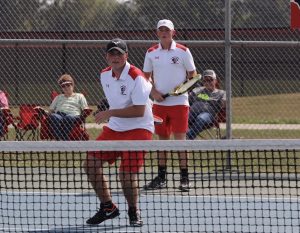 Connor Pyle and Kyle Johnson posted another strong match at #1 Doubles, winning 6-1, 6-0.   Not to be outdone, Senior Dylan Chandler and Junior Connor Keith locked down the #2 Doubles court with an identical score of  6-1, 6-0.  Brady Howell played steady against his Shenandoah opponent at #3 Singles but lost 3-6, 0-6. 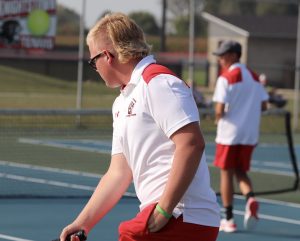 Knightstown will play New Castle in the Sectionals Championship match tomorrow starting at 4:30 PM at the Trojans home court.   The Panthers have played a long and tiring stretch of tennis, with 5 matches in the last 6 days, but we’ll be ready to defend our Sectional Title.