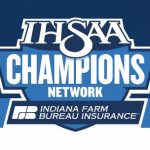 As we watched the TEC Finals wind down late Monday night at Union County, people huddled around their phones watching the IHSAA pairing show.  One of my players yells over, “Coach, we’ve got Tri High”.  Tri High Coach Duke Falck looked over at me and smiled.  We both knew that the road to a Sectional title would likely end up going through each other, one way or another.  Our two sons had just stepped off the court, exhausted from a great battle for the #1 Singles TEC Champ, and they’d be back at each other in less than 2 days.  Given how close the kids are between our two programs, it was a a tough draw.  30 minutes later, both teams are sharing a meal on the way home, laughing, kidding with some good natured smack-talk.  This is what high schools sports is all about; the kids.

We’ve seen Tri High 5 times this year, and each one was a battle.  We scrimmaged in August, we opened our season against them, we faced them in the County Tourney and again in the TEC Conference Tourney.  Both teams know the other team well, and Tri has an all senior team starting varsity.  We needed to play well and our kids knew it. 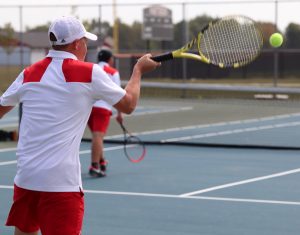 Brady Howell came out of the gate with a nice win at #3 Singles, winning 6-1, 6-0, scoring our first point.  Cooper Davis, struck next, winning #2 Singles with an identical score of 6-1, 6-0.  The Panthers were off to a good start.  #1 Doubles, with Sophomores Kyle Johnson and Connor Pyle, have been very good all year.  They had a great battle, winning 6-4 6-3, locking down the victory for the Panthers.  But there was a lot of tennis yet to be played. 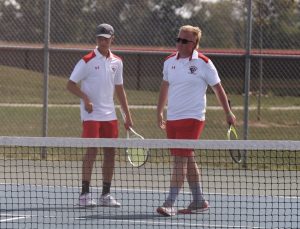 #2 Doubles was having a marathon match that went into a full 3rd set.  Senior Dylan Chandler and Junior Connor Keith won the first set 6-4, but dropped the next two 4-6, 2-6.

Garrett Dalton was facing Kyle Falck at #1 Singles for the 5th time this year.  Each one was a war, and this one was no exception.  Garrett won the first set 6-2, Kyle bounced back to win the second 7-5.  The third set end in a 6-6 tie.  Both players throttled back and played a strategic tie break, with Garrett pulling out the win for the Panthers 7-5.  The match could not have been any closer.  Knightstown won the 1st Sectional round 4-1.

The Panthers move on to face Shenandoah in the second round tomorrow in New Castle at 4:30 pm.