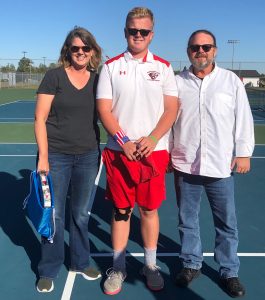 The Panthers celebrated our two graduating seniors in style, sending the Royals packing back west with a 4-1 Varsity victory and a 3-0 JV win.   Cooper Davis and Dylan Chandler have anchored the Panther Tennis program for four years and they will be sorely missed.

Although the Panthers swept the Royals 5-0 last year, we knew that their program is improving.  The first point for Knightstown was scored at #2 Doubles, where Senior Dylan Chandler and Sophomore Connor Keith won 6-4, 6-1.

Garrett Dalton won the next point for the Panthers with a fiery victory at #1 Singles.  At times the match got a bit heated, but Dalton played well, winning 6-1, 6-0.  Brady Howell dropped the #3 Singles court 4-6, 0-6, taking the match to 2-1. 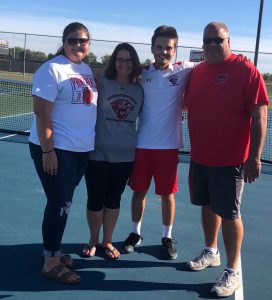 Senior Cooper Davis secured the win for the Panthers by taking the #2 Singles Court 6-3, 6-0.   Kyle Johnson and Connor Pyle turned in a strong performance at #1 Doubles, topping the Royals 6-1, 6-2.

The JV squad, the future of Panther Tennis, also dominated.   Aiden Richardson at #1 Singles, Jace Wilkerson at #2 Singles and Ethan Woods at #3 Singles  all defeated their Eastern Hancock opponents with identical scores of 8-1 to finish the evening.

The Knightstown tennis team finished their 2019 regular season with a 16-2 record, and a combined regular season record over the last three years of 56-3.