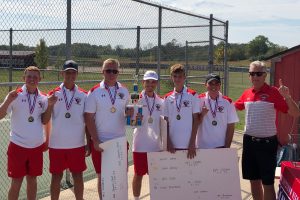 The Knightstown Tennis team put in one of their most consistent performances of the year at the 2019 Henry County Tourney, securing their third consecutive county title.   The Panthers hosted this year and the conditions were windy and hot, with play starting at 9:00 AM Saturday morning and not finishing until after 3:00 PM. 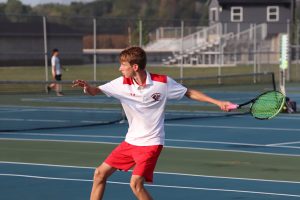 The Panthers set the tone early, winning all five first round matches and sending all of our players to the Championship Round.   Garrett Dalton beat his Shenandoah opponent 6-0, 6-0 at #1 Singles,  while Cooper Davis beat Tri High 6-0, 6-1 at #2 doubles.  Brady Howell knocked off #3 Singles Blue River Valley 6-3, 6-3.   Kyle Johnson and Connor Pyle blanked their BRV opponent at #1 Doubles 6-0, 6-0 , while Dylan Chandler and Connor Keith finished the team-perfect first round with the win at #2 Doubles, winning a tough match against BRV with a score of 6-4, 6-7. 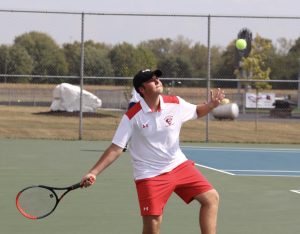 In the Championship Round, the Panthers gave notice, winning four  out of the five matchups.  Garrett Dalton had a great battle against Tri High, winning 6-2, 7–5, giving Knightstown their first of 4 county titles.  Cooper Davis followed suit, playing some of his best tennis of the year.  Coop beat Shenandoah in a repeat of last year‘s final, only dropping one game with a 6-1, 6–0 victory.  Brady Howell played a consistently good match but lost at #3 Singles to Shenandoah, 5-7, 4-6. 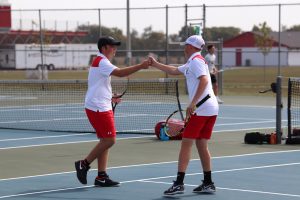 The remaining doubles courts were strictly Knightstown versus Tri High shootouts with the County Championship hanging in the balance. Tri has been very strong at doubles for the last several years but the Panthers really focused on doubles play during practices over the summer, and clearly the hard work paid off. 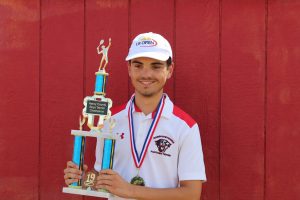 Connor Pyle and Kyle Johnson played very well, winning the #1 Doubles title at  6-4, 6-2.  Dylan Chandler and Connor Keith put in their best match of the year, winning a seesaw battle at #2 Doubles 7-6, 7-5 over Tri.

The Panthers dominated the final scoreboard:

Knightstown will be back in action on Monday when TEC opponent Hagerstown comes to town.