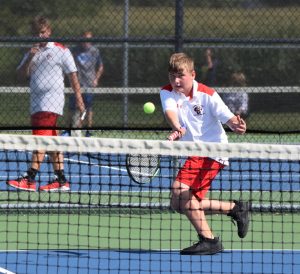 Knightstown tennis traveled to Blue River Valley to play a much-improved BRV squad Saturday morning.  Coach Klein has recruited many of the varsity basketball team and we faced an opponent that averaged at least 6’ 2”.

Garrett Dalton dueled his way to a 6-2, 6-1 win to start the Panthers off with a point.  Cooper Davis faced down a skilled #2 Singles player, winning a tiebreak first set 7-6 but dominating the second set 6-1 for the 2nd court victory.  Kyle Johnson and Connor Pyle at #1 Doubles have been undefeated so far this year save a medical forfeit, and played their normal consistent game winning 6-2, 6-1. 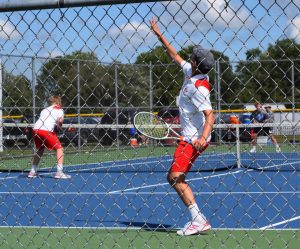 The Panthers have another busy week ahead, facing Shenandoah away on Monday, TEC opponents Winchester and Union City on Tuesday and Wednesday, then the County Tournament and a JV Tournament on Saturday.