The Panthers turned their attention to the Sectionals Tournament after finishing up the regular season 19-0.  We felt we had a favorable draw with a first round bye, but we were taking nothing for granted.  We traveled to New Castle Thursday under cool conditions – Indiana weather in late September can be unpredictable. 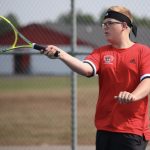 Garrett Dalton scored the first win for the Panthers in short order, pitching a shut-out 6-0. 6-0.  Alex Cook and Dylan Chandler delivered the same results at #2 Doubles, dropping another 6-0, 6-0 victory on the Raiders.  Knightstown had their game faces on. 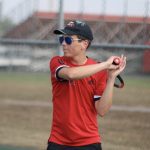 Cooper Davis faced the same Shenandoah opponent he played 11 days prior at the County Tournament.  This court was very balanced.  Ironically, Cooper won with the exact same score that he did in the prior matchup: 7-6, 6-2.  Senior Ethan Yoder was back in the lineup from an injury that sidelined him during the TEC Tourney.  He and Kyle Johnson won a good matchup at #1 Doubles 6-2, 6-4, extending the Panther lead to 4-0. 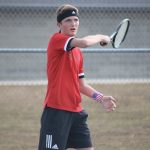 AJ Dalton and Cory Evans once again had an epic battle at #1 Singles.  Both Seniors knew that there was nothing on the line but pride, as the match was technically over, but it didn’t show on the court.  This match went on for 3 hours and 15 minutes and every point was contested, with both players requiring a medical stop during the action.  AJ won the 1st set in a tie-break 7-6, lost the second set 4-6, then the third set went to a tie break at 6-6.  AJ won the final sudden-death tie-break 7-2.  The Panthers had completed the 5-0 sweep to advance to the Sectional Finals Friday night.  The victory celebration moved down the road to Taco Bell, but the Panthers shifted their focus quickly to the Finals, where they face Tri High Friday.  The Sectional Championship match begins at 4:30 PM in New Castle.