Knightstown finished the regular season in style with a 5-0 sweep over Eastern Hancock.  Reaching back to August 2017, this team has won 35 regular season matches in a row, two County Championships, two Regular Season TEC titles and a few Invitational Titles.  Yet serious work remains, with the 2018 TEC Tourney Saturday and the Sectionals next week. 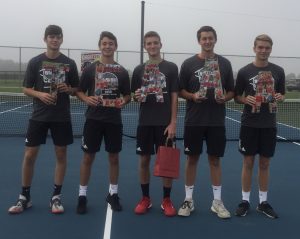 Tonight was the last regular season tennis match for seniors AJ Dalton, Alex Cook, Austin Campton, Ethan Yoder and Trevor Cook.  As I said at Senior Day, this is a special group of kids and they will be sorely missed.  We’ve changed the culture of this team and they walk on the court expecting to win every match, and they have fun doing it. 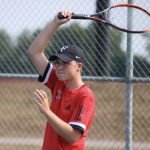 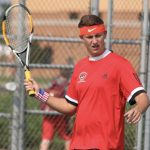 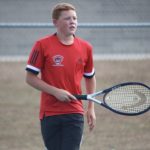 Eastern Hancock was short handed at JV, so we played three sets of doubles.  Connor Keith and Connor Pyle notched a victory at #1 Doubles JV at 6-1.  Senior Austin Campton and Brady Howell won at #2 Doubles JV, winning 6-1 as well.   The only loss of the evening came at #3 Doubles, with Jonathon Brading and Aiden Richardson losing 2-6.

The Panthers travel to Winchester Saturday for the 9 team TEC tournament. We travel back again on Monday for the championship round, and await the Sectional Draw at 7 pm.   The sectionals start two days later at New Castle.