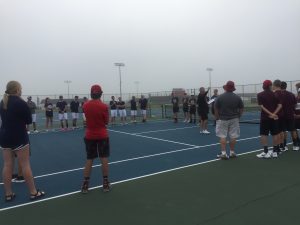 In a battle that started with heavy fog and warmups at 8 AM, and wasn’t decided until the final serve well after 2 PM, the Knightstown Panthers won their second Henry County Tennis Championship in a row on Saturday.   Coming in, we knew that Tri would be our toughest challenge. Between the four schools; Shenandoah,  Blue River Valley, Tri High and Knightstown, all five champions came from the Panthers and the Titans.

Knightstown was leading after the first round by putting four of their five courts into the championship round.   AJ Dalton led the way at #1 Singles, playing Shenandoah’s Cory Evans.  The two seniors have had great battles over four years and some truly marathon matches.  AJ played well, winning 6-3, 6-2.  Garrett Dalton battled Tri to a 6-4, 6-2 win at #2 Singles. Junior Cooper Davis came out firing, dominating the #3 Singles Court 6-0, 6-0.  Ethan Yoder and Kyle Johnson put away their first round Shenandoah opponent at #1 Doubles 6-1, 6-1.  In the Panthers only loss of the first round, Alex Cook and Dylan Chandler faced a very good Tri High #2 Doubles opponent, losing 3-6, 4-6.   The Panthers led the board at the end of the first round with a three point advantage over Tri and Shenandoah.

Cook and Chandler rallied in the Consolation Round to score important points for the Panthers, winning at #2 Doubles over Blue River in convincing fashion, 6-1, 6-0.  Sophomore Garrett Dalton, for the second time in two years, walked away with the #2 Singles County title, hammering his Shenandoah opponent 6-0, 6-0.  This gave Knightstown their first win in the Championship round.   Tri High countered back by winning the #1 Doubles title, with Tri’s Jimmy Jeffries and Dillon Stevens beating K-town’s Ethan Yoder and Kyle Johnson 6-2, 6-3. 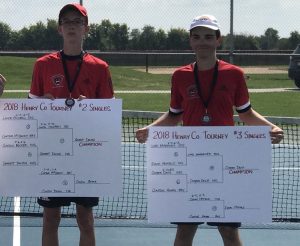 Knightstown, however, quickly answered back at #3 Singles at the hands of Junior Cooper Davis. Coop won the first set 7-6 in a tiebreak over his Shenandoah opponent, then cruised in for a win in the second set 6-2, giving the Panthers their second Championship round win.

That advantage faded quickly, as Tri High came back with another Championship round win at #2 Doubles over Shenandoah.  All eyes, and the Championship, turned to #1 Singles, where AJ Dalton and Kyle Falck were having a great battle. 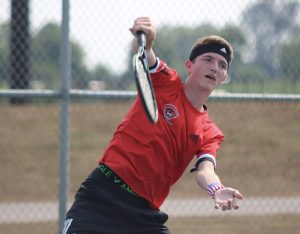 Falck won the first set 3-6.  AJ struggled early on, playing with a heavily-taped and sore right wrist.  Both players were crushing the ball, and it was some of the best tennis we’ve seen all season.   AJ Dalton made a few critical adjustments, dug deep, and came back to win the second set 6-3.  At his point, all other matches were over and all four schools were watching this critical court.  The Championship was to be decided with a 10 point sudden-death tiebreak between Dalton and Falck.

Both players came off the court for an IHSAA mandated 10 minute break.  With 2 minutes remaining, AJ stood up and asked me where the Championship stood.  I told him, “It’s very simple – you win, we win.  You lose, we lose.”  Nothing else was said, except for his teammates firing him up and he walked out. 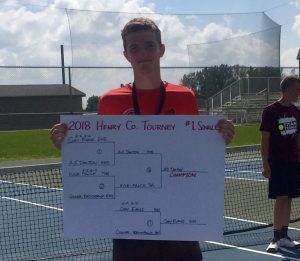 Managing his game and his nerves, AJ lost the first point but rallied back to win 8 straight points.  Kyle battled, but AJ answered each call, winning the tiebreak 10-3.  The Panthers won the Henry County Championship for the second consecutive year. 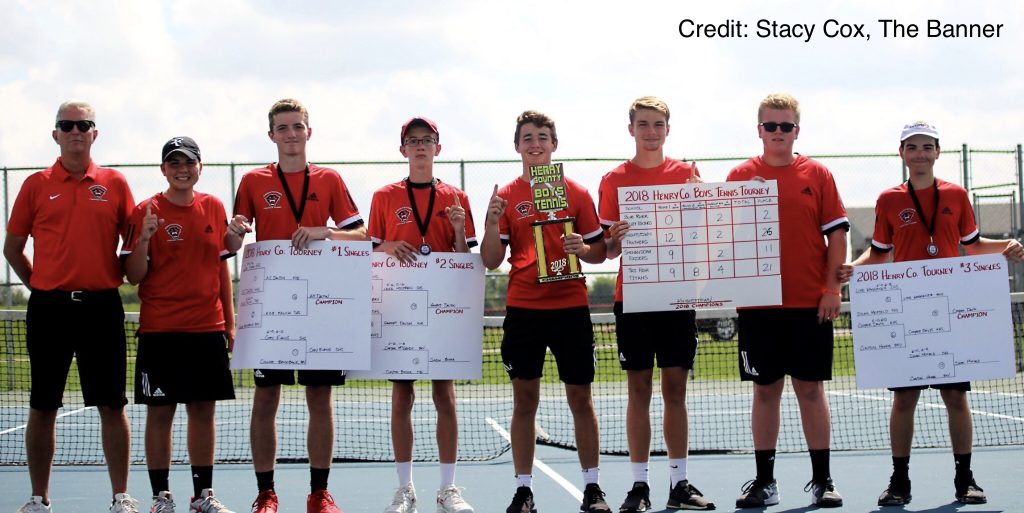 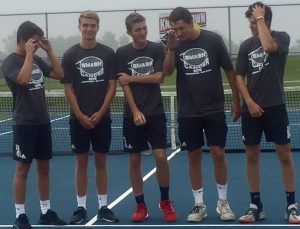 Amid a great day for Panther Tennis, we also celebrated Senior Day.   AJ Dalton, Ethan Yoder, Alex Cook, Trevor Cook and Austin Campton have been at the core of a complete turnaround for Knightstown tennis.  In addition to being a very tightknit group of friends, they’ve provided not only “senior leadership“ but comic relief at every turn.  This group will be sorely missed and leave behind a winning culture. 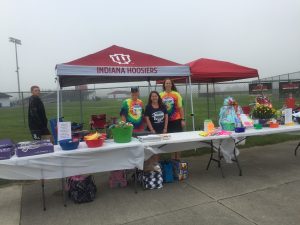 As if that weren’t enough for one day, we also had the Smash Cancer fundraiser running simultaneously. We successfully raised $750 for a local family who is struggling with a brain tumor, and is “one of our own”.  Special thanks to all of our tennis parents and players that helped out, especially Jennifer and Corey Johnson, Amanda and Doug Pyle, Tina Stimel, Tracy Schweizer of Bullpen Apparel as well as players Connor Pyle and Aiden Richardson.